What is Pushing Mongo? Is Mongo Pushing a Wrong Way of Skateboarding?

Most of the beginner skateboarders start pushing mongo without actually knowing that it is wrong, and the irony is that most of them do not feel wrong at all until someone points it out to them.

As a beginner skateboarder – it is wise to learn about it early on – before your foot sets in.

Once set – it becomes quite difficult to change your technique especially if you have advanced on to learning skateboarding tricks.

Rectifying Pushing Mongo is almost like starting skateboarding new again – which is absolutely killer for the action sport.

So what exactly is this mongo pushing skating stance fuss all about?

What is Pushing Mongo?

What is Pushing Mongo?

Pushing mongo, Mongo Pushing or Skateboard Mongo – (all same terms) is considered as a wrong way of skateboarding, where you use your front foot instead of your back foot to push your way forward while riding the skateboard. And your back foot stays on somewhere in the middle of the board.

So obviously you might ask then “what is the correct way of pushing?”

The universally accepted way of pushing is with the back foot while the front foot rests near the front trucks.

The word mongo has its roots in the slang of Spanish and Portuguese where mongo is used to describe a retarded person.

Some say that it is derived from the Mongols as the pushing in mongo stance resembles a Mongolian riding a horse and hence the term “mongo skate”.

Why do Skaters Hate Mongo Pushers?

Although there is no written rule book about skateboarding, there are some things that are universally adhered to by the skateboarding community and Mongo pushing is one of those unwritten laws that are highly ridiculed upon.

Skateboarding is a creative sport, all about style and constant innovation with young skateboarders around the globe trying to achieve the next impossible. And pushing mongo definitely strips you of that style.

It has lately been on the receiving end of a lot of criticism with several pro skaters completely ridiculing riding mongo.

Why is Mongo Pushing not good? And why so much of criticism?

Many people start pushing mongo when they begin skateboarding without knowing about it as it comes naturally to them.

Even some of the famous pro-skateboarders started out riding mongo and later changed their stance into a normal one, because it is difficult to become a pro-skateboarder with this skating stance..

Mongo pushing can be bad for many reasons. Below we have listed six of them –

When is Pushing Mongo Okay?

For something being deemed so incorrect it surely has quite a bit of importance in skateboarding.

The stance of mongo if not bad is definitely used in certain tricks.

Sharing an image from electric-skateboard.builders. They have simplified all kinds of stances, in one beautiful infograph. Rectifying the Style

What to do if you Mongo Push?

What would you do if you suddenly came to know that something you are doing since a very long time was actually wrong?

Would you feel embarrassed about it because you never felt it being wrong in the first place?

There is no need to worry as it is never late to learn the widely accepted way of pushing.

All you need is practicing the normal stance on a smooth surface until your body gets comfortable with it and forgets mongo foot.

It is really up to you in the end, if you feel really comfortable riding mongo and don’t care about what anyone says, there is no need to change unless you are really into the sport for making a name for yourself.

Then you might have to think about what will get you there. And Mongo Pushing surely isn’t going to do that. 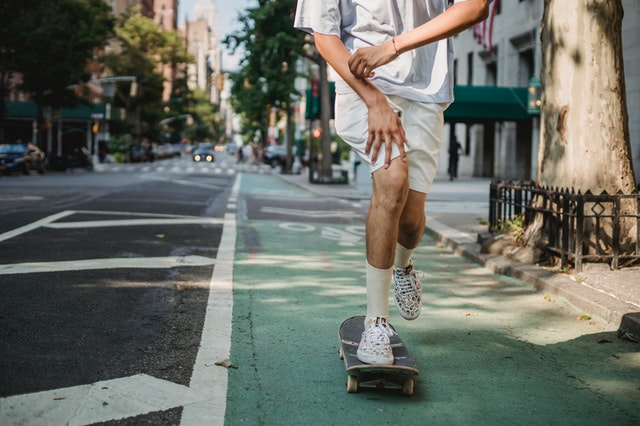 Do any Pro Skaters Push Mongo?

Many Pro Skaters Push Mongo – without considering what the viewers believe.

The advanced tricks they perform – comes from the convenience and proper positioning of their bodies on the board. And if mongo pushing allows them that – they use it.

Some pro claim that the technique allows them a stronger push.

Below are some of the famous pro skaters who started their career using this technique and changed many years later – and some who still continue pushing.

Bill Danforth was so much into pushing mongo – that he became known as “Pushing Dan” and “Mongo Pusher”.

Eric Koston was famous for pushing switch and was parallelly known to have a mongo foot .

Other famous pro skateboarders known for mongo push are-

Is Pushing Mongo Bad on a Longboard?

Pushing mongo on longboards can do more harm than on skateboards.

The irony to this – is mostly longboarders involved in this technique.

Longboards are long – and hence to stimulate them needs more of your body and control on the deck.

With right foot above and left foot pushing – there are chances you will collapse if you are not able to center yourself.

And this can cause some damage.

If you are a longboarder – then it is highly advisable to switch to not mongo push style.

If you cant change then better change your skateboarding abode.

Skate on empty streets and pathways or best go to a skatepark.

Busy streets will be more harmful anyway – but with pushing mongo as your technique it will be icing on the top.

Better Skate Safe than to harm yourself.

How to Ollie (7 step guide to perfect Ollie)